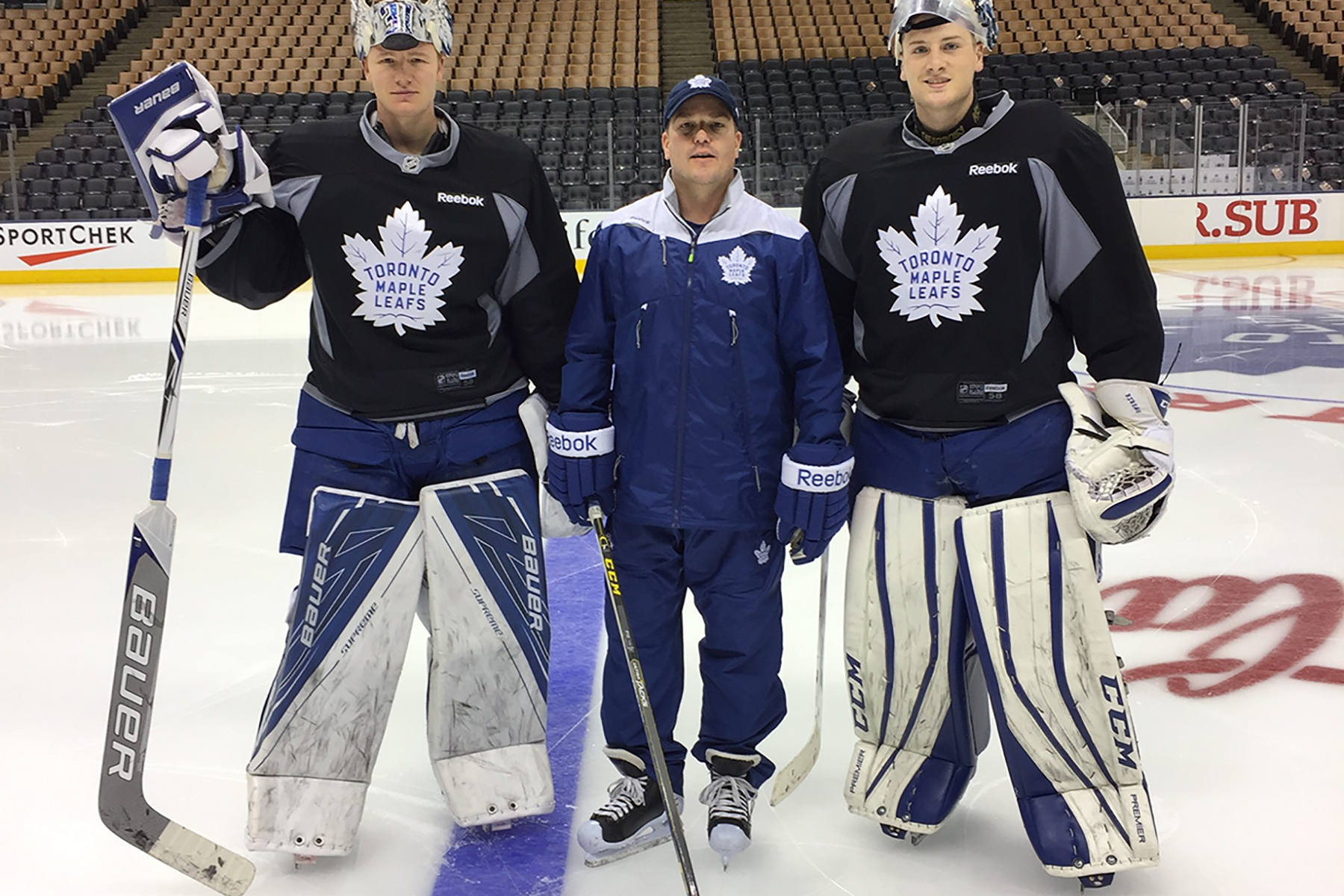 Steve Briere is the current Toronto Maple Leafs NHL goalie coach. Through years of development, he has led and founded... [Expand/Collapse]

...the UnLock Goaltending Program for goalies of all ages.

From the age of 8 years old, Steve knew that he wanted to be a Professional Goaltender. Born in Montréal, QC, Steve and his family settled in Winnipeg, MB around the age of 7. While in Montréal, Steve spent a lot of his time with his older cousin, Daniel. Daniel also happened to be a goalie and this would be where Steve’s dream of following in his cousins footsteps would begin! From then on, Steve would eat, sleep and breathe hockey, and in particular, Goaltending.

His childhood hero was of course the great Patrick Roy along with the  legends that would be, Terry Sawchuk, Ken Dryden and Johnny Bower. Fast forward to the age of 15 when Steve left his home in Winnipeg, MB to begin his Junior Hockey Career in Trail, BC followed by playing in the USHL for the Omaha Lancers and the Sioux City Musketeers. He then went on to receive a College Scholarship at the University of Alabama in Huntsville ( UAH ) where he would go on to win a NCAA Div. I National Championship in 1998. He graduated with a Degree in Business before carrying on with his Professional Goaltending career which included signing with the Providence Bruins in the AHL and the Manitoba Moose in the IHL before heading across the pond to play in the British Elite League. As Steve’s playing career was coming to a close, he made the decision to go back to College at UAH to earn a Masters Degree in business along with pursuing his next dream of becoming a Professional Goaltending Coach. He started out as an Assistant at UAH working with NHL Goaltender Cam Talbot where the NCAA Div. I Chargers captured the CHA Championship in 2007, which over time, then led him to coach the Topeka Roadrunners of the NAHL, the Fargo Force of the USHL, the Des Moines Buccaneers of the USHL and the Casper Coyotes of the WSHL. Steve is also an active participant in USA hockey and previously worked with the team USA U14 team as their Goalie Coach as well as a USA Hockey CEP Instructor and District evaluator.

Throughout the years, Steve has received mentorship and friendship from legendary Goaltending Coach, Mitch Korn. Mitch has encouraged Steve and helped him to gain his position now as Head Goaltending Coach for the Toronto Maple Leafs which he will forever be grateful for. Steve brings over 20 years of instructional experience to the UnLock Program. He is a big believer in never giving up the dream. Hard work and determination along with being a good person will always be the key to success. He continues to prove daily that this method works and he continues to mentor and encourage others to believe in themselves and never, ever give up. 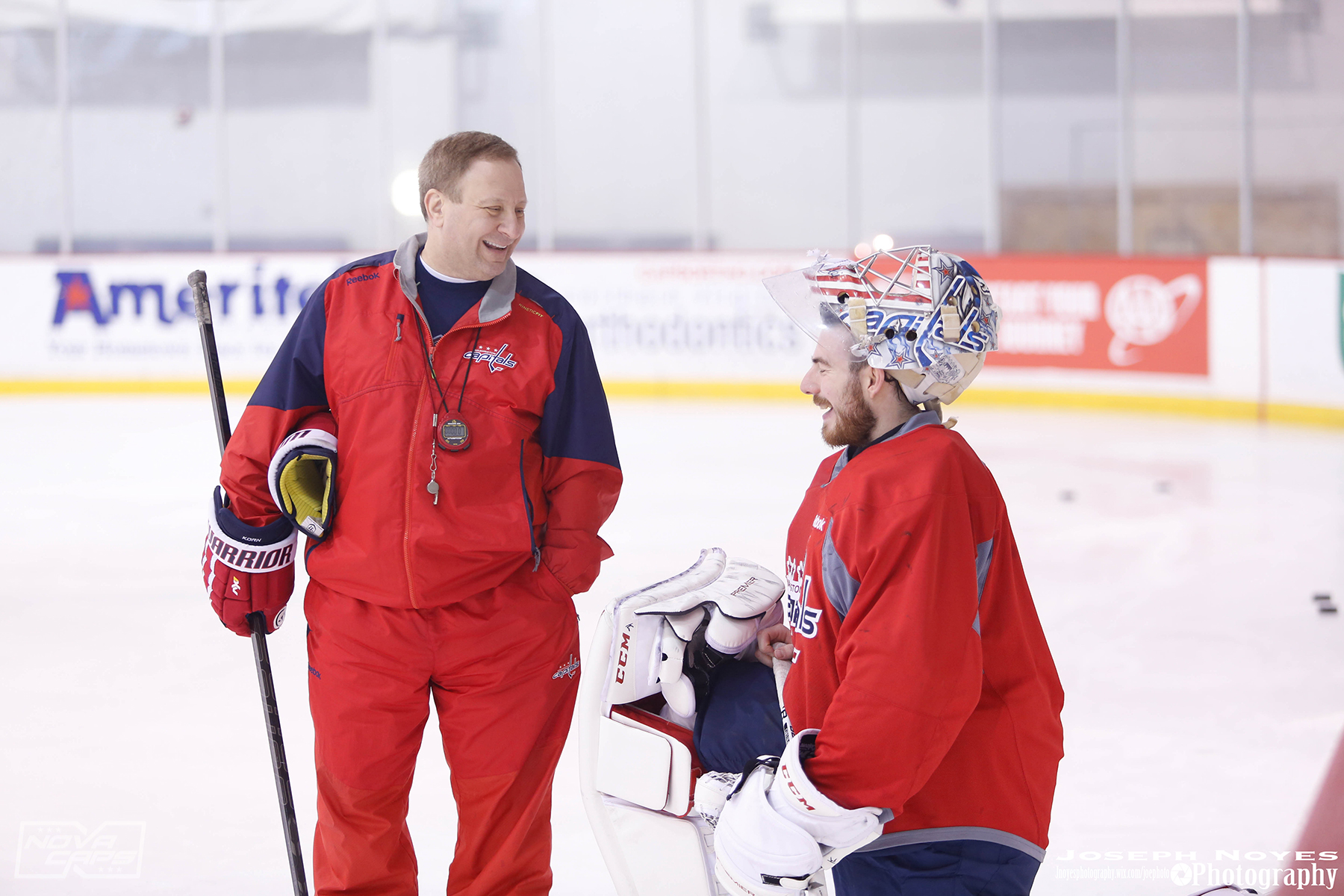 Perhaps the best known name in the world of goalie coaching is Mitch Korn. Mitch has worked with Hall of Famer’s like Grant... [Expand/Collapse]

...Fuhr and Dominic Hasek as well as numerous top present-day NHL goalies like Pekka Rinne, Braden Holtby, Scott Darling, and more!. His success is undeniable having been the goalie coach in Buffalo for 7 years followed by 16 years in Nashville (a run that is unheard of in today’s NHL) before moving on to the Washington Capitals where in 3 years with the team, Holtby was nominated twice, and won one Vezina.

Mitch is an authority in the goalie world, having written for many publications including USA Magazine, Goalies’ World, InGoal Magazine, and others. For three decades, Mitch has also been running one of the world’s top goalie schools KORN CAMP for both Goalies and Defensemen, where he works with goalies of all ages. Mitch impacts nearly 500 goalies per summer!

With 27 years of NHL coaching experience plus the experience of running a successful camp coaching goalies of a wide range of ages, who better to help UnLock Goaltending create a program truly tailored to all goalies? We are proud to have Mitch Korn on our team! 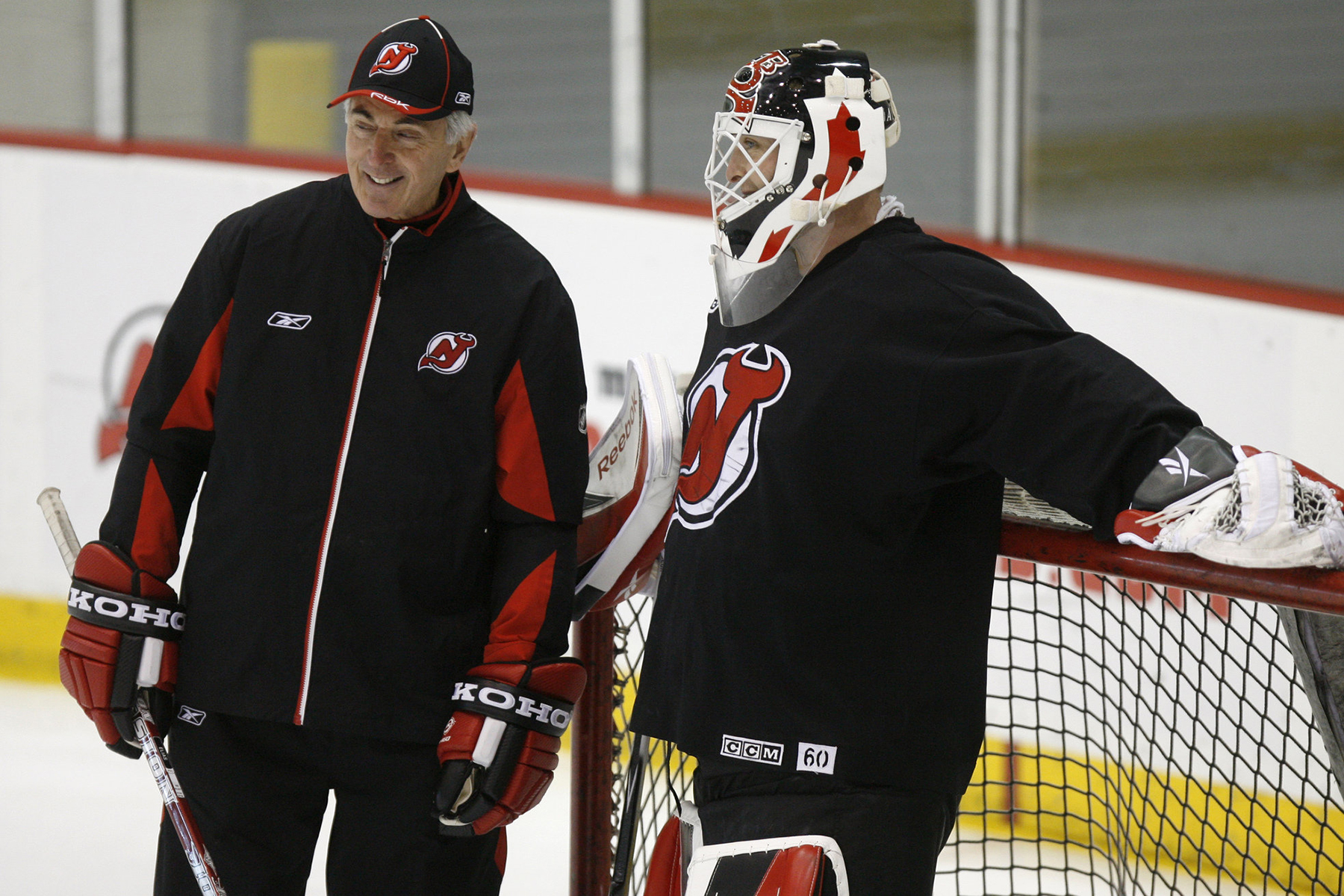 Jacques Caron's professional goaltending career started in 1960. He continued to play professionally for 18 years while... [Expand/Collapse]

...running a hockey school in the summer months.  In the the 16 years he ran the Noranda, Quebec hockey school he trained players of all ages, many went on to have careers in the NHL.

Jacques’  career as a goaltending coach in the NHL began with the Hartford Whalers. After 11 years of success in Hartford, he went on to take the position of goaltending coach for the New Jersey Devils for the next 20 years and is still with the Devils as a consultant. The highlight of his coaching career was to win 3 Stanley Cups and to develop Martin Brodeur, the greatest goaltender in NHL history. He also helped to develop many other goaltenders that had successful careers in the NHL as both players and coaches. Jacques has found that to develop successful goaltenders you not only develop their skill as a goaltender but you develop their strength in the mental aspect of goaltending. This he feels produces the best all around goaltender. 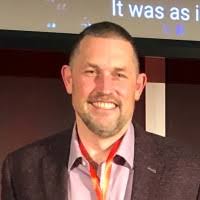 Joel comes to UnLock as the Director of Performance, with a background in entrepreneurship and leadership. Joel's son is a UnLock family member too! [Expand/Collapse]

Recognized by others as a relentless instigator of action while pioneering strategic exponential growth, leveraging talent and market conditions that significantly contribute to profitability, sustainability, market dominance and productive organizations.

Bilingual graduate of Canadian Royal Military College, who is an engaged team builder, visionary leader with an entrepreneurial attitude. 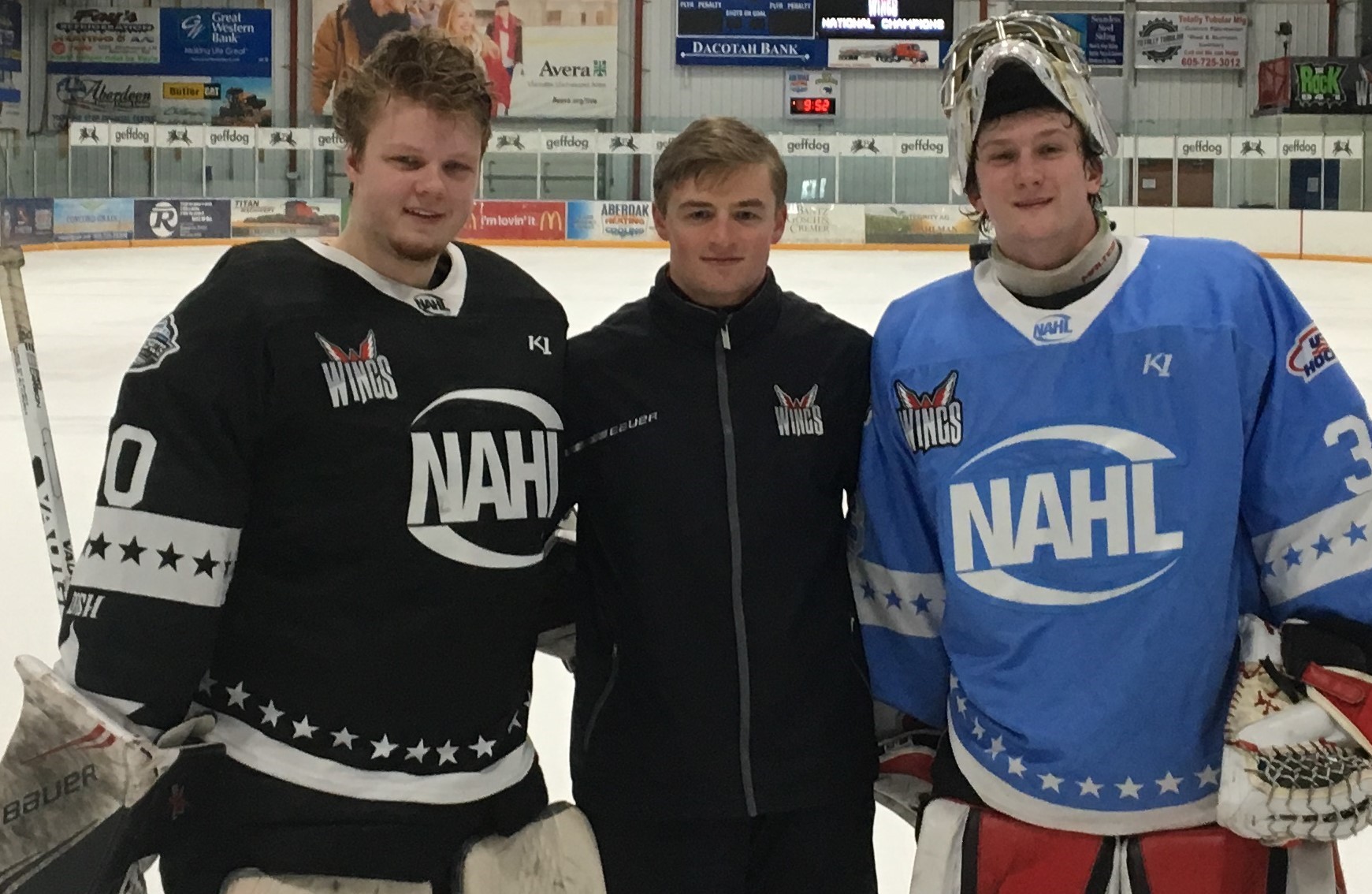 Josh is the Chief Operations Officer and Professional full-time goalie coach. Currently with the Aberdeen Wings of the NAHL.... [Expand/Collapse] 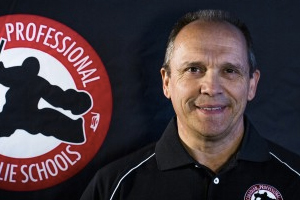 ...in top end player development, influential leadership and team management. He has a proven track record for coaching and managing teams that compete hard and win.

Gord is known as a dynamic, innovative and energetic communicator who enjoys operating in fast-paced, results-oriented and competitive environment. Developing winners to perform and compete successfully under pressure is one of his greatest passions.

Gord strives to empower others with a passionate work ethic; he uses a systematic approach for promoting and supporting powerful mental edge training and preparation; essential for elite level performance and competitive excellence.

A time-tested and proven performance-mindset communication platform is leveraged and provides recipients with the experience of learning, growing and succeeding in skilled and highly competitive, teamwork environments. Life changing stuff!

Gord provides the key elements for the behavioral, character and mental development side of the game and he brings 25+ years experience as a performance mindset coach; working with teams in the NHL (PRO), AHL (PRO), NAHL (JR A), CCHL (JR A), CIS (UNIV) and NCAA (Div 1 & Div 3). Also works with government agencies, private companies and volunteer organizations… Gord is the main developer of the mental development side of the web site.

...how to apply themselves in competitive team environments.
Marc has 22 years experience coaching sports and business teams on how to build a performance mindset environment (incl. NHL, AHL, NCAA, NAHL, CJHL, CCHL). Marc also helps competitive athletes develop mental toughness and GRIT through a higher level of understanding of what triggers their Mind, Body and Spirit in competitive environments. He is the author of two successful performance training programs (Performance Architecture & Strength Finder, developed over 22 years of profiling coaches and athletes who achieve their goals and objectives consistently. 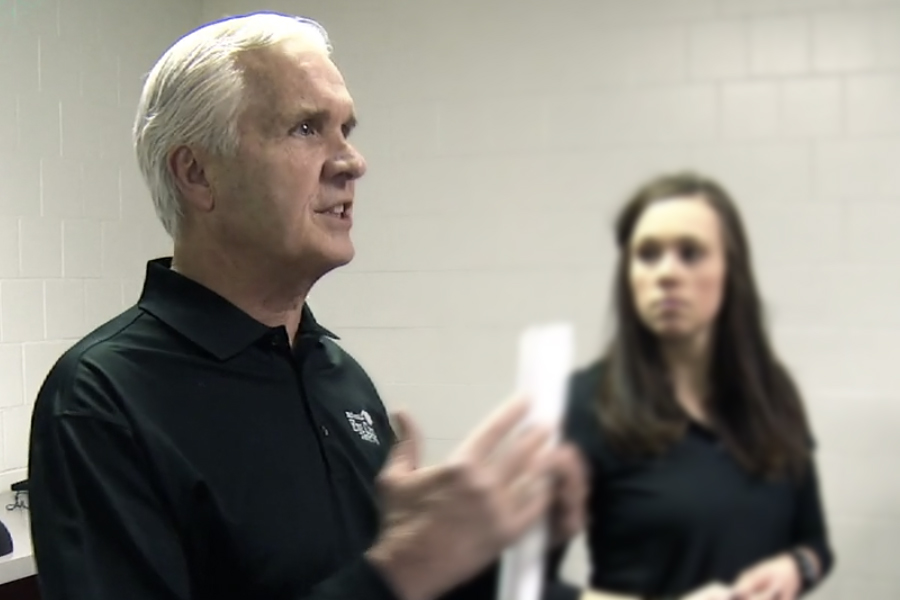 A graduate of the Pennsylvania College of Optometry, Dr. McDonald has extensive experience in... [Expand/Collapse]

...primary eye care, glaucoma treatment, and pre- and post-operative care for Lasik and cataract surgery patients, and contact lenses. As a former teacher and father of three, he has cultivated a large pediatric patient relationship. Having been trained in sports vision and vision therapy through the Baltimore Academy of Behavioral Optometry (BABO), he integrates his appreciation for sports, learning, and his desire to see children succeed. Dr. McDonald is a charter member of Lakeville Rotary, the Paul Harris Fellowship, and the Lakeville Area Chamber of Commerce. He and his Wife Patti have received the Business Persons of the Year award from the Lakeville Chamber of Commerce that they have been members of since 1986. Dr. McDonald served on the Lakeville Community Corp for fifteen years and was instrumental in the building of Ames Hockey Arena in Lakeville. 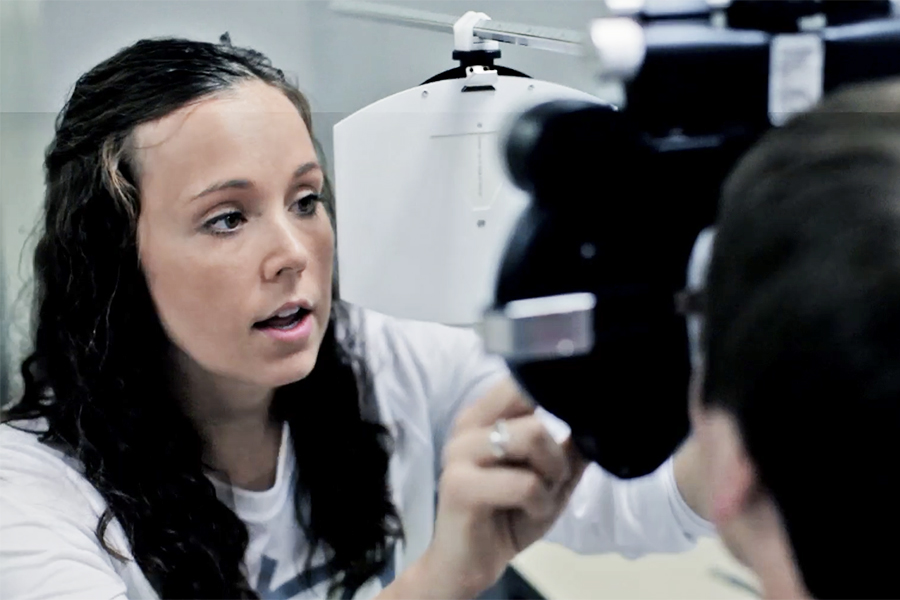 ...on their sports specific visual game. She also works with children and adults in Vision Therapy for academic and post-concussion treatments.

A graduate of Lakeville High school, Dr. Molly Staack was a four year varsity women’s hockey player. With two girls’ State high school hockey tournament appearances Dr. Staack was the first recipient of the Herb Brooks Award her senior year. The Herb Brooks Award is presented to the most qualified hockey player in the state tournament who strongly represents the values, characteristics, and traits that defined Herb Brooks. She went on to play Division 1 women’s ice hockey at Cornell University in Ithaca, New York graduating in 2008.

Dr. Staack is a 2012 graduate from The Ohio State University College of Optometry; where she fostered her professional interests in primary eye care with an emphasis on contact lenses, disease detection and treatment, and pre- and post-operative surgical eye care. After graduation she worked at Minnesota Eye Consultants, focusing in cataract, corneal, and glaucoma surgeries. During that time she helped write two chapters in “Limbal Relaxing Incisions: A Practical Guide” with Doctors David R. Hardten and Richard Lindstrom. She also spent time with a local lasik group determining a patients candidancy in preoperative appointments and managing patients after lasik surgery. 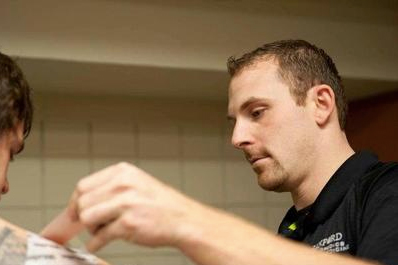 Phil Faught MS, ATC has been the Athletic Trainer and Strength Coach for the Fargo Force of the USHL for the past 8 seasons... [Expand/Collapse]

Phil started with the team at its inception and has been studying, training, and testing Junior Hockey athletes through the Sanford POWER Hockey Academy to develop be greater understanding of the hockey athlete.  Phil is the director of the Sanford POWER Hockey Academy in Fargo and has been developing youth through professional athletes in strength and conditioning, synthetic ice skills, and on the Woodway Blade hockey treadmill. In addition to covering Sports Medicine for the Fargo Force (USHL), Phil has traveled with the USA Hockey Junior A Challenge team for the past two seasons winning Gold and Bronze respectively.  Before the Fargo Force Phil worked Division III hockey at Concordia College in Moorhead Minnesota. Phil grew up in rural North Dakota and enjoys Farming, Gardening, and Motorcycling in the off season.